Matthew Wilson recently graduated with a Print Master of Art (MA) from the Royal College of Art in London. He has now returned to his hometown of Edinburgh, and is back in the printmaking studio at Edinburgh Printmakers.

He tells us about his printmaking work, how he finds inspiration in repetition and weird long night shifts. 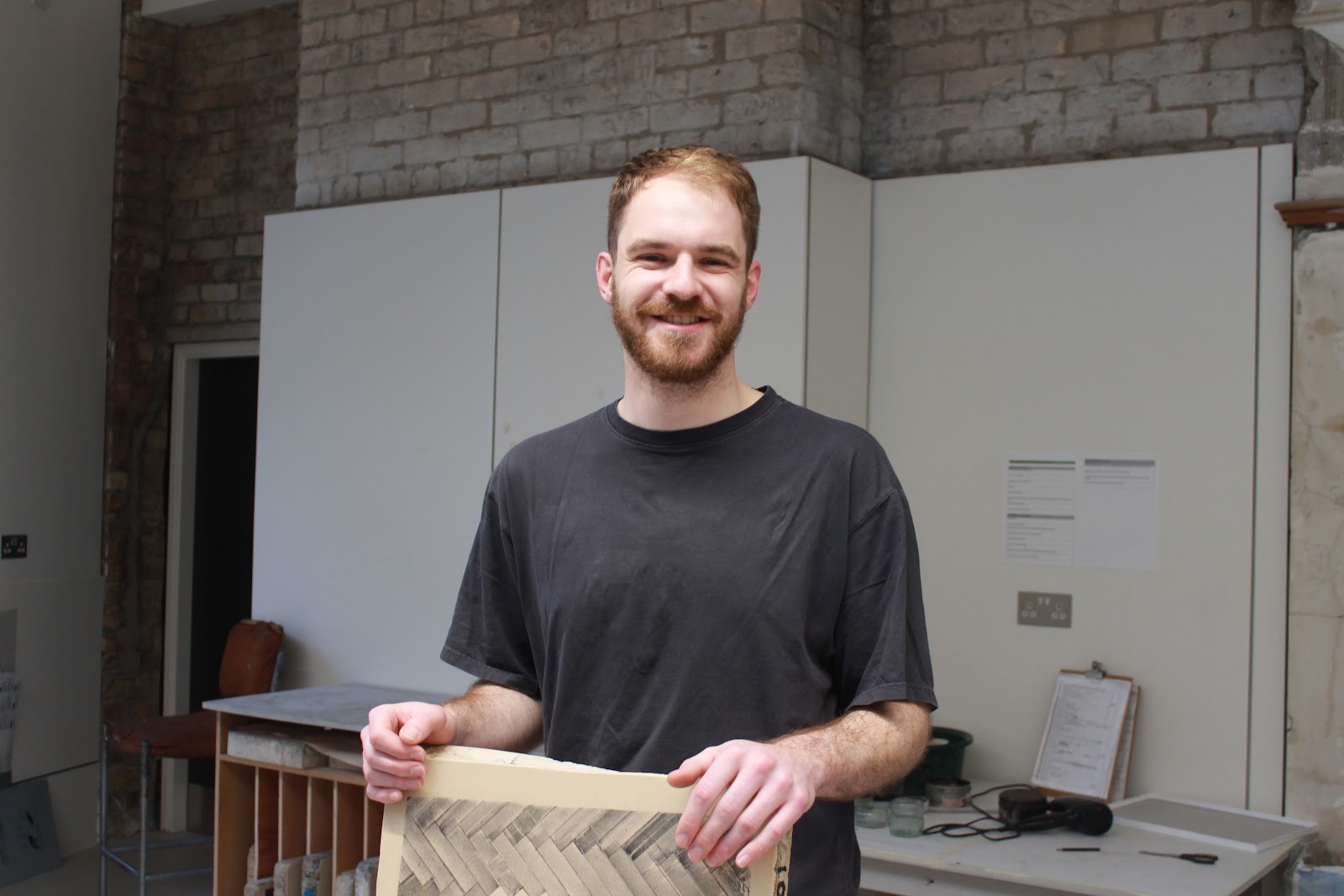 What kind of printmaking do you do? Tell us about your work as an artist.
"I work with a pretty broad range of media. I used to work almost entirely with lithography and screenprinting, but now it’s whatever best facilitates an idea. I finished a Print MA at the Royal College just over a year ago, and that really helped me see printmaking as an interdisciplinary method that can be applied to anything in fine art. My work is all about human actions within a context and looking at the variation in its outcomes, which usually comes from a repetitive process. I think the interest has come from my print background, because it’s how I’ve always seen the medium; as a way to produce art that’s repeatedly played with, rearranged, broken down, or put back together until you have what you want."

What are you working on at the moment?
"I’m slowly building up a new project. It’s in very early stages, so it mostly revolves around a written practice. At the minute I’m envisioning something sculptural, but there’s so many little subjects and ideas that I can see being thrown at it that I know I’ll end up calling on a lot of different media to help realise the whole thing."

Where do you get your inspiration from?
"I’m always drawn to something repetitive but I think that can be found in anything, so I have a bit of a magpie tendency when it comes to finding things that I want to put into a piece of work. I enjoy looking for the tiny similarities in these seemingly disparate things, because then I feel like I can take those little pieces of them and make them work together in a new context. Before, all my projects became occupied with one particular subject, but now I think that all of my interests have the capacity to function together so I want to collage all of them together and see what sticks!"

What’s your favourite piece of printmaking?
"I don’t think I have a favourite piece. I have always loved Robert Rauschenburg’s work. Even though he didn’t always work with print media, he operated at a time when artists where stretching the method beyond any of its original purposes. His work has an immediacy that comes from non-stop experimentation with process, and I always saw print being in the middle of all that."

Tell us about what you do when you are not making art?
"I’m working as a freelance workshop tutor at Dundee Contemporary Art’s print studio, I’ve been doing that for a few years at different studios, including EP. I also work at National Galleries Scotland as a gallery attendant. I basically do the weird long night shifts, hanging out with all the creepy portraits."

How long have you been a member for?
"Just over six years. I joined after finishing uni at Dundee, and then became a studio assistant before doing some teaching there for a couple years."

What’s your favourite memory at Edinburgh Printmakers?
"I remember a stint a few years ago when I barely left the workshop, I was making about ten separate editions for RSA New Contemporaries in about two months. I had very little interaction with people outside the studio, and everyone there were absolute lifesavers!"

What do you think of the new studio at Castle Mills?
"I love it! The new space and facilities give people a chance to expand what’s possible for their work in print. I’ve been making full use of the laser cutter, I think every print studio should have one! It just introduces options for printmakers that weren’t there before."

Is there anything else you would like to share?
"I have a piece of writing titled Gear-heavy in a new publication, THE SCAFFOLD by Folium. They’re an artist-led publishing platform led by Harry Gammer-Flitcroft and Stewart Hardie, who I met at RCA. My work included comes from a sculptural installation I exhibited earlier this year.
I just got a new studio space with Mutual Co-op in Craigmillar… Follow them on Instagram @mutual_coop."

A bone is broken and reset, as a rock is removed from the earth, and then returned (diptych).

Own Art makes buying art easy and affordable by letting you spread the cost of your purchase over 10 months with an interest free loan.